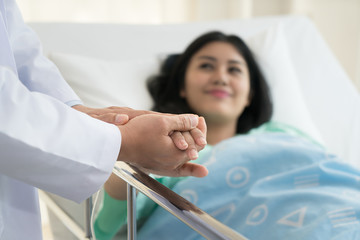 Many women do experience first trimester bleeding and go on to have healthy pregnancies but with any symptoms of miscarriage, a doctor should be consulted immediately. A doctor will likely check for a fetal heartbeat and possibly do an ultrasound. Also, a doctor may do an internal pelvic examination. In some cases, doctors will also measure your HCG levels via a blood test, as these levels tend to rapidly increase in early pregnancy.

When doing a pelvic examination, if your cervix is open, a miscarriage is imminent. If it is still closed and you are bleeding vaginally, this is labeled as a threatened abortion. Waiting is pretty much all that can be done at this stage. While the possibility of a miscarriage can be very emotionally painful, time will tell quickly via symptoms, signs and medical results. Again, while many women experience first trimester bleeding and cramping, not all symptoms of a miscarriage result in the termination of the pregnancy.

Some women have a miscarriage without any symptoms of a miscarriage. A pregnant woman can be discover she has miscarried when an ultrasound occurs or lack of a fetal heartbeat is found. This can be very traumatic. The reason that most pregnancies do not survive is due to genetic abnormalities that prevent the embryo from viability. Most women feel pain and regret, believing they could have done something to stop it but chances are that it was nothing you could have done or not done. Many miscarriages happen without women ever being aware that they had been pregnant, because they end so early in the pregnancy.

There’s no reason to believe that a miscarriage will prevent you from a future pregnancy. If a woman has several consecutive miscarriages, a doctor will work to determine the cause and potential help but the vast majority of women that miscarry, do so only once and go on to have healthy, full term pregnancies.

When you have any symptoms of a miscarriage in early pregnancy, it’s important to: visit the doctor immediately, try to relax and enlist the moral support of people you can count on to help you through this unnerving time. It’s also important to realize that in many cases, these symptoms do pass and result in healthy, full term babies.