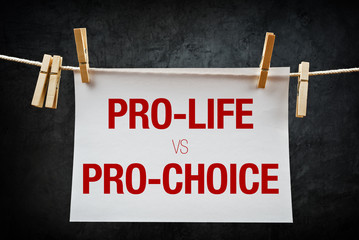 The term “Pro-Life” is central to the debate of the validity of abortion. Pro-Lifers are generally against all types of Induced Abortion, both Therapeutic Abortion and Elective Abortion. They feel that human life begins at conception, and that every stage of this life, from embryo to fetus to newborn, has a right to life.

People who are against abortion believe that more growth and change in physicality occurs in the gestational period before birth than occurs throughout the rest of a person’s life. Within the first three weeks, basic biological set up for the brain, spinal cord and nervous system begin to develop and the heart begins to beat. In the next few weeks, the baby forms limbs, lungs, eyes, musculature, and eventually begins to move. At five months, the mother can feel the baby kick; at six months, the baby can hear; at seven months, the baby’s eyes open and it can see. They are also against abortion because they believe it can be painful for the baby.

With all of the growth and change listed above, Pro-life believe that the baby is also developing a soul and a consciousness that will be destroyed by abortion. The issue of the existence of a soul is commonly brought up by those who are against abortion. Many Pro-Lifers believe in God and in the creation of a person’s soul at the moment of conception.

Pro-Lifers who are Christian believe that the Bible reinforces their beliefs against abortion. Christians use Bible verses to build logic behind their belief system. For example, the Bible teaches not to destroy innocent life (Genesis 9:6, Exodus 20:13, Deuteronomy 27:25a, Proverbs 6:16-19). Many claim that the Bible states that unborn babies are human life in books like Luke and Genesis. The books of Luke and Jeremiah state that God knows a person’s soul before they are born. Therefore, an unborn child must be human life because God knows the child, and it is against God’s will to destroy human life.

Pro-Lifers are against abortion even in the case of rape or incest. While they believe that these are despicable crimes and the perpetrators should be punished, they feel that the unborn children created by these crimes should not be punished. These are innocent byproducts of sexual crimes.

They do not feel that abortions should be funded in any way by the government. This includes the funding for clinics like Planned Parenthood. People who are against abortion sometimes commit violent acts of aggression aimed at abortion clinics. Abortion doctors have been killed, and clinics have been destroyed because of fanatical Pro-Lifers. Most Pro-Lifers feel these people are wrong to kill in order to prevent abortions